The Diocese of Rockville Centre 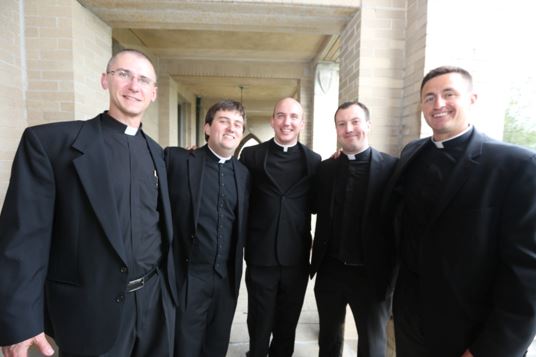 ROCKVILLE CENTRE, NEW YORK – June 21, 2017 – The Most Reverend John O. Barres, Bishop of the Diocese of Rockville Centre, will ordain five men to the priesthood for the Diocese of Rockville Centre. The Mass of Ordination will take place at the Cathedral of Saint Agnes, Rockville Centre on Saturday,
June 24, 2017 at 11:00 a.m. This Mass will be broadcast live on Telecare (rebroadcast at 9 p.m. EDT), the diocesan television station (Cablevision channel 29/137, Verizon FiOS TV channel 296, Time Warner Cable channel 471).

Each newly ordained priest will be assigned to a parish in the Diocese of Rockville Centre where he will serve as an associate pastor.

Deacon Michael Bissex, 27, was raised in South Huntington, New York, the sixth child in a family of seven, and a parishioner of the Parish of Saint Matthew in Dix Hills. During his elementary school and high school years, he studied classical violin and piano extensively, joining the Metropolitan Youth Orchestra and the Long Island Youth Orchestra, traveling with the latter each summer on concert tours. Discerning a call to enter the seminary, Michael entered Cathedral Seminary House of Formation in Douglaston, Queens, majoring in philosophy as a freshman and sophomore. He then was accepted into the Basselin Scholarship Program at the Catholic University of America, still as a seminarian for the Diocese of Rockville Centre. After completing a Licentiate in Philosophy in 2013, Michael was sent to the Pontifical North American College to begin his theological studies. Michael was ordained a deacon at Saint Peter’s Basilica in Rome on September 29th, 2016.

Father Bissex will celebrate his first Mass on Sunday, June 25 at 12:30 p.m. at the Parish of Saint Matthew, Dix Hills.

Liam McDonald was baptized at the Parish of the Cure of Ars in Merrick, but raised in several different states and parish families during his childhood and teenage years. His family spent time in Rhode Island, Southern New Jersey and Northern Virginia before relocating back to Long Island. While completing his undergraduate studies in architecture, he enjoyed playing soccer and Division III rugby. After completing his degree in architecture, he worked for nearly four years as an estimator for a mechanical contracting firm on Long Island. These were formative years for Liam as he was attentive to growing in prayer, partaking in the Holy Sacrifice of the Mass before work (Parish of the Holy Spirit, New Hyde Park). During this time he was able to devote himself to charitable outreach on a regular basis and benefited from the many friendships and role models he encountered while volunteering for the Life Center of Long Island and the Sisters of Life. Liam believes the source of his vocation is the Eucharist, the Blessed Mother and the witness of Pope John Paul II. He also attributes his vocation to his family. He is grateful for his parents for forming and raising him in the Faith and his two sisters for their constant love and encouragement. Liam completed his formation at Saint Joseph’s Seminary, Dunwoodie.

Father McDonald will celebrate his first Mass on Sunday, June 25 at Noon at the Parish of Saint Elizabeth of Hungary, Melville, New York.

Deacon Mike Plona is a native Long Islander from the parish of Saint William the Abbot in Seaford. He attended the parish grade school and Kellenberg Memorial High School. At Kellenberg, Mike became very involved in the school and first felt a call to serve the Church there. Mike later attended Saint John’s University and then Molloy College from where he graduated with a Bachelor’s Degree in history and political science in 2011. During his college years, Mike worked in maintenance and carpentry at Kellenberg, as a vendor at Nikon Theater at Jones Beach, and a record store. After spending a few months discerning a vocation with the Marianist community at Kellenberg, Mike started his seminary formation at Douglaston in January 2012 studying for the Diocese of Rockville Centre. Mike spent the two summers between classes at Douglaston working at Boy’s Town in Nebraska with highly at risk youth. Mike completed his formation at Saint Joseph’s Seminary, Dunwoodie.

Father Plona will celebrate his first Mass on Sunday, June 25 at 3:00 p.m. at the Parish of Our Lady of Loretto, Hempstead.

Christopher Sullivan grew up in the Parish of Saint Patrick, Bay Shore. Christopher is a product of Catholic schooling starting in Saint Patrick’s elementary, followed by Chaminade High School, finishing at Loyola University Maryland, where he would earn bachelor’s degrees in theology and philosophy. Christopher enjoys staying active by participating in sports. While at Chaminade, he was a member of the cross country and track team and while at Loyola he was a member and captain of the cycling team. Christopher is blessed to have come from a family who made mass a priority every Sunday. Later, while in college, Christopher would begin attending mass daily. Remaining close to the sacraments and to the Blessed Mother led Christopher to hear the Lord’s voice and His calling to the priesthood. Christopher completed his formation at Saint Joseph’s Seminary and has spent the last two summers at the Parish of Saint Christopher in Baldwin.

Father Sullivan will celebrate his first Mass on Sunday, June 25 at the Parish of Saint Patrick, Bay Shore at
3 p.m.

John Wachowicz is a parishioner of the parish of Saint Mary in Manhasset. John was born in Manhattan, raised in Little Neck, and moved to Manhasset at 14. He is a graduate of Saint Mary’s Elementary School in Manhasset and Regis High School in Manhattan. After graduating from Fordham University with a B.A. in philosophy, he entered Saint Joseph’s Seminary. The past two summers, John served at the parish of Saint John the Evangelist in Center Moriches. His childhood desire to be a priest was strengthened in high school and college by the Christian witness of his family and parish priests, the spirituality of Saint Ignatius Loyola, and his discovery of the Church’s teachings in various 20th century encyclicals. He enjoys listening to and playing music, and has played with rock, Irish folk, and bluegrass groups. He also enjoys 19th-Century Romanticism in the arts, Doctor Who, and the New York Mets.

Father Wachowicz will celebrate his first Mass on Sunday, June 25 at the Parish of Saint Mary, Manhasset at Noon.

ABOUT US
We in the Diocese of Rockville Centre make up the Roman Catholic Church on Long Island. As a sacramental community, we are one with the Catholic Church throughout the world, while here at home we are united under our Diocesan Bishop, Bishop John O. Barres, to live the Gospel of Jesus Christ as one family of faith and to celebrate this life in our liturgy, sacraments, prayer and service.
Contact us: webmaster@drvc.org
FOLLOW US
© The Diocese of Rockville Centre. All rights reserved.
MORE STORIES