“The Ithaca College Athletics Hall of Fame Induction Ceremony provides a time for the Bomber family to pause and celebrate our rich tradition of excellence in all sports,” said Susan Bassett, Ithaca College Director of Intercollegiate Athletics and Recreational Sports. “The 2017 Hall of Fame class represents the best of that tradition and will inspire us all to emulate their outstanding careers and accomplishments.” 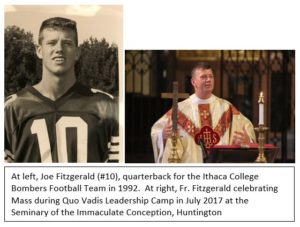 Fr. Fitzgerald played three seasons as a quarterback under legendary Hall of Fame coach Jim Butterfield in the early 1990s and was a member of the 1991 national championship team that went 12-1. Fr. Fitzgerald continued his athletic career as a handball player from 1993-2004 on the USA National Team after graduating from Ithaca. Fr. Fitzgerald appeared in 22 games at quarterback, but stepped into the starting role as a senior in 1992. During that 9-2 campaign, Ithaca led all of Division III in rushing offense with 306.5 yards per game and was third in the nation in total offense at 419.9 yards per outing. The Ithaca Bombers eclipsed 40 or more points in six contests and finished the season with an average of 38.6 points per game. 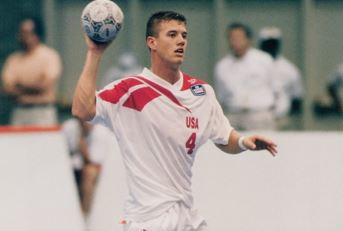 As a senior, Fr. Fitzgerald ran for 593 yards and four touchdowns and passed for 845 yards with 11 more scores. He led Ithaca in total offense that season with an average of 143.8 yards/game.

On the world stage, Fr. Fitzgerald (pictured, at left) competed in the 1996 Olympics Games in Atlanta – the last handball team to qualify for the Olympics as part of his 12-year professional handball career. He was named the USA Team Handball Athlete of the year in 2001 and was on the Pan-American Team in 1999 and 2003. That 2003 squad was a bronze medalist in the Games. Fr. Fitzgerald also played one year professionally in Sweden.

Father Joe Fitzgerald is a native Long Islander – born in Bay Ridge, Brooklyn – but raised in Saint Joseph’s parish, Babylon – a product of Catholic Elementary School, and Standout Athlete at North Babylon High School before attending Ithaca College from 1989-1993 . His Olympic and National Team experience allowed him to travel the world to over 60 countries where he experienced the true meaning of our Catholic (Universal) faith while attending Mass in each country. The Eucharist and the Blessed Mother (as well as many prayers from his own Mother) kept him close to his faith and eventually inspired and led him to enter the seminary in August of 2001. Fr. Joe was ordained on June 9, 2007 – he spent two years serving at St. Kilian parish in Farmingdale, four years as the Chaplain at Holy Trinity Diocesan High School and Hofstra University and is currently the Vocations Director of the Diocese of Rockville Centre. He looks to Pope Francis as his inspiration along with the Blessed Mother, St. Joseph, and Pope St. John Paul II. Fr. Joe’s Favorite Scripture Quote is Matthew 16: 15-16 – “But who do you say that I am?” Simon Peter said in reply, “You are the Messiah, the Son of the living God.”

About The Diocese of Rockville Centre

The Diocese of Rockville Centre (www.drvc.org) was formed in 1957 and covers 1,198 square miles in Nassau and Suffolk Counties. The diocese serves approximately 1,524,639 baptized Catholics* (total population in both counties is approximately 2.9 million). There are 133 parishes plus 1 campus parish in 115 towns. In 2016, 17,114 baptisms, 14,026 confirmations, 14,626 First Holy Communions and 3,134 marriages took place in the diocese. There are 14,708 students in Catholic elementary schools; 11,642 students in Catholic high schools and 3,425 students in higher institutions. There are 47 Catholic elementary schools (43 parish or regional and 4 private), 10 high schools (3 diocesan, 2 parish and 5 private) and one Catholic college (Molloy College, Rockville Centre) in the diocese. In 2017, there are 115,000 children in parish Faith Formation programs taught by 12,000 volunteer catechists. The diocesan School of Missionary Disciples has 175 participants. In 2017, more than 3,215 families gave witness to a committal service at 3 diocesan and 20 parish cemeteries. Several hundred families also acted in faith of the resurrection with choosing a selection of graves, crypts and cremation niche spaces as well as memorials for their family’s future in our diocesan sacred grounds. Catholic Health Services (CHS) of Long Island is comprised of six hospitals, three health care centers, four homes for the aged, a regional home care and hospice network, and a community-based agency for persons with special needs. More than 17,500 employees and 4,600 credentialed physicians work within the CHS system. Catholic Charities provides Care With Dignity…Life With Hope to the poor, isolated, vulnerable, and disadvantaged on Long Island. Since its founding in 1957, the agency has grown to a position of leadership as one of the largest human service providers in the region with services that include: mental health care, chemical dependency treatment, veterans services, maternity services, food and nutrition services, immigration services, health insurance enrollment, senior services, affordable housing for seniors, services for people with physical and developmental disabilities, or a combination of these. In 2016, more than 600 staff members and 400 volunteers provided nearly 1.5 million face-to-face services to 55,955 people of all faiths and backgrounds from 60 service sites in Nassau and Suffolk counties. The single largest outreach to the People of God on Long Island is through the diocesan media outlets. The diocese maintains vibrant Facebook, Twitter and Instagram platforms. Telecare, the diocesan television station broadcasts 24/7/365 to over 1.5 million homes; The Long Island Catholic Magazine, the official diocesan print publication is mailed 10 times per year to over 12,000 subscribers; the weekly LICatholic E-newsletter is emailed to 8,000 recipients. The diocesan website drvc.org averages approximately 18,000 unique visitors each month; Fe Fuerza Vida, the official Diocesan Spanish-language newspaper has a circulation of 11,000 and is printed ten times each year. (10/17) *As of 2016

Bishop Barres’ Homily for the Memorial of Saint Clare of Assisi