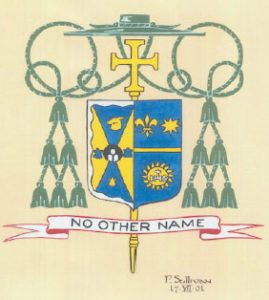 The coat of arms of a diocesan bishop is composed of the seal of his diocese and his personal arms, adopted when he became a bishop.

Arms impaled. Dexter: Per saltaire Azure and Or, on an ogress between two escallops in the flanks and one in base, the chief charged with a lamb’s head couped all conterchanged, three coupeaux, one over two, Argent with a border wavy of the last. Sinister: Azure a barlet Or between to chief dexter a fleur-de-lis and to chief sinister a star of eight points both of the second; in base a sunburst of the last charged with the monogram of the Holy Name Argent.

The episcopal heraldic achievement, or bishop’s coat of arms, is composed of a shield, with its charges (symbols), a motto scroll and the external ornaments. The shield, which is the central and most important feature of any heraldic device, is described (Blazoned) in 12th century terms, that are archaic to our modern language and this description is done as if being given by the bearer with the shield being worn on the arm. Thus, where it applies, that the terms dexter and sinister are reversed as the device is viewed from the front.

By heraldic tradition, the arms of the bishop of a diocese, called the “Ordinary,” are joined to the arms of his jurisdiction, seen in the dexter impalement (left side) of the shield. In this case, these are arms of the Diocese of Rockville Centre, New York.

The arms of the Diocese are composed of four sections in alternating colors of blue and gold, representing the two counties, Nassau and Suffolk, which make up the territory of the diocese. In the upper center of these four sections is placed a lamb’s head to honor the virginal innocence of St. Agnes, titular of the Cathedral-Church in the See City and in the other three segments are scallop shells in reversed colors of the alternating fields. The shells are to pay particular honor to the heritage of the thirteen tribes of Algonquin Indians that originally inhabited the area that is now Long Island and who employed the shells of the region in so many ways. The wavy silver border of the design indicates that the Diocese is an island and at the center of the design is a black rounded charges with three rocks, as taken from the arms of Pope Pius XII who erected the Diocese in 1957, indicating by a play on words that the diocese is “rock-ville center.”

For his personal arms, seen in the sinister impalement (right side) of the shield, His Excellency Bishop Murphy has retained the design that was adopted at the time of his selection to receive the fullness of Christ’s Priesthood, as a bishop, when he became Auxiliary Bishop of Boston.

These arms are composed of a blue field on which is displayed a gold barlet across the center. Above the gold barlet are a gold fleur-de-lis, which is taken from the arms of Pope Paul VI, during whose pontificate His Excellency was ordained as a priest and in whose service the Bishop worked in the Pontifical Council for Justice and Peace. Beside the fleur-de-lis is an eight-pointed gold star, symbol of Mary, Star of the Sea, Morning Star, and into whose protection the Bishop placed himself and his ministry as a bishop. The star is found in many of the churches of Rome, including St. Peter’s Basilica where Bishop Murphy was ordained to the priesthood.

In the lower section of the design is a gold sunburst charged with a silver monogram of the Holy Name (IHS). This is the symbol of St. Bernardine of Siena who called people to the love and reverence of the Holy Name. This symbolism was also used in the arms of Cardinal Bernardin Gantin whose fatherly guidance in the Roman Curia was such an important part of Bishop Murphy’s life.

For his motto, Bishop Murphy uses the phrase “NO OTHER NAME.” This is a reference to one of the first discourses of St. Peter as recorded by St. Luke in the Acts of the Apostles (Acts 4:12): “There is no other name under heaven given among men by which we can be saved.”

The device is completed with the external ornaments which are a gold episcopal processional cross, which is placed in back of the shield and which extends above and below the shield, and a pontifical hat, called a “gallero,” with its six tassels in three rows on either side of the shield all in green. These are the heraldic insignia of a prelate of the rank of bishop by instruction of The Holy See of March 31, 1969.

By Paul J. Sullivan, a deacon of the Diocese of Providence, R.I.